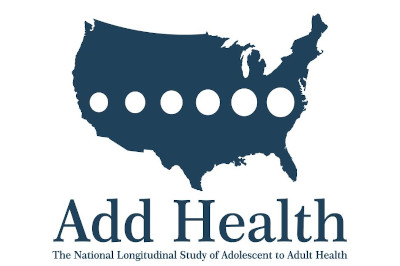 The University of North Carolina at Chapel Hill Carolina Population Center has received two grants, providing an expected $38.2 million over 5 years, that together will fund Wave VI of the National Longitudinal Study of Adolescent to Adult Health (Add Health). Now entering its 28th year of National Institutes of Health (NIH) funding, Add Health is the largest, most comprehensive, nationally representative and longitudinal study of the health of adolescents who have now aged into adulthood ever undertaken in the United States.

The new grants, funded primarily by the National Institute on Aging with co-funding from five other NIH institutes and offices, will enable researchers to follow the original adolescent cohort into their 40s with a sixth wave of data collection and dissemination. This 5-year project will focus on the cognitive, mental, and physical health of Add Health participants, with particular attention given to disparities in health across racial/ethnic, socioeconomic, and gender subgroups of the population.

Allison Aiello, the new Deputy Director of Add Health and a Professor of Epidemiology at the Gillings School of Global Public Health notes, “Research on the early signs and symptoms of health conditions that usually manifest in older age, such as cognitive impairment, age-related loss of physical functioning, and dementia, are rarely studied in early midlife, particularly at the national level. The new measures of cognitive and physical functioning in Wave VI will provide an opportunity for researchers to study the accumulation of risk or preventative factors for later-life health, decades before conditions emerge in older age. These measures may provide new insights on ways to slow down or prevent age-related conditions.”

Since 1994, Add Health has provided the data for more than 3,500 scientific papers in the social, health, policy, and medical sciences. Add Health combines longitudinal survey data on respondents’ social, economic, psychological and physical well-being with contextual data on their family, neighborhood, community, school, friendships, peer groups, and romantic relationships, thus providing unique opportunities to study how social environments and behaviors are linked to health and socioeconomic outcomes in adulthood.

Among many of the papers published to date, foundational studies based on Add Health data have helped document how the obesity epidemic has unfolded in the United States, brought the silent epidemic of largely undetected high blood pressure in young adults into public awareness, and pioneered work on how the social environment interacts with genetic markers to influence behavior and health in adulthood. Add Health data have also been instrumental in helping the scientific community better understand health disparities across subgroups of the U.S. population. The new wave of data will inform current trends, including rising health risks in middle-age and participants’ exposure to COVID-19.

Starting in 2021, the five-year project will collect a new sixth round of social and biological data from as many of the original 20,000+ respondents as possible, who live in all 50 states, when they are in their mid-40s. Together with existing Add Health data collected over the past 25+ years, the scientific community will be able to investigate an invaluable longitudinal record of the Add Health cohort through the fifth decade of life.

The study’s new director, Robert Hummer, is the Howard W. Odum Distinguished Professor in the College of Arts & Sciences’ Department of Sociology. Professor Kathleen Mullan Harris, the James E. Haar Distinguished Professor of Sociology, who served as the director of Add Health from 2004 to 2021, stated that “the new wave of data collection will advance knowledge for how early life—during adolescence and young adulthood—matters for health and well-being in midlife, and will provide substantial additional payoff for the huge investment that NIH has made in Add Health over the past 25+ years.”

Dr. Harris will continue to serve as one of the study’s research investigators for the next five years.

The new funding from NIA and other NIH institutes and offices will also allow researchers to better understand how adolescent experiences and environments help shape the health and social experiences of individuals as they move into the middle adult years and beyond.

A team effort to create data

The team of Add Health researchers includes sociologists, psychologists, epidemiologists, geneticists, physicians, and research methodologists. They work in collaboration with each other to design the study, collect the data, and make the data available to thousands of researchers all over the world.

Add Health Director Robert Hummer noted that the team of staff members, postdoctoral researchers, and students who work on the study are dedicated to producing data that will create new scientific knowledge about the health of our society.

“It’s extremely unique that scientists across such a breadth of disciplines all collaborate together on Add Health,” he said. “The Carolina Population Center has created an environment for such ‘team science’ to thrive.”

The Add Health team based at the Carolina Population Center at UNC will work in close collaboration with their 20,000+ participants, as well as study collaborators at RTI International, the University of Vermont, and Exam One, in addition to their funders at the NIH.

“Add Health has evolved because of a trusted, lengthy partnership between researchers, participants, and funders,” says Hummer. “It’s really astounding how this ground-up effort has evolved over many decades, and continues to impact the way we understand human health and health disparities in the United States.”